Al Mughsayl Beach is one of the best tourist spots in Salalah,which is the capital city of Oman’s southern region called Dhofar.This beach is partly surrounded by mountains.This amazing place is 40kms away from salalah and has beautiful scenic views in every direction.We have visited the place around 4-5times during the two years of our stay in Salalah.Check Out here,Salalah – The Gulf’s Summer Paradise. People consider Al Mughsayl Beach & Al Marneef Cave as the same place because of its extension; hence I've combined both in one post. 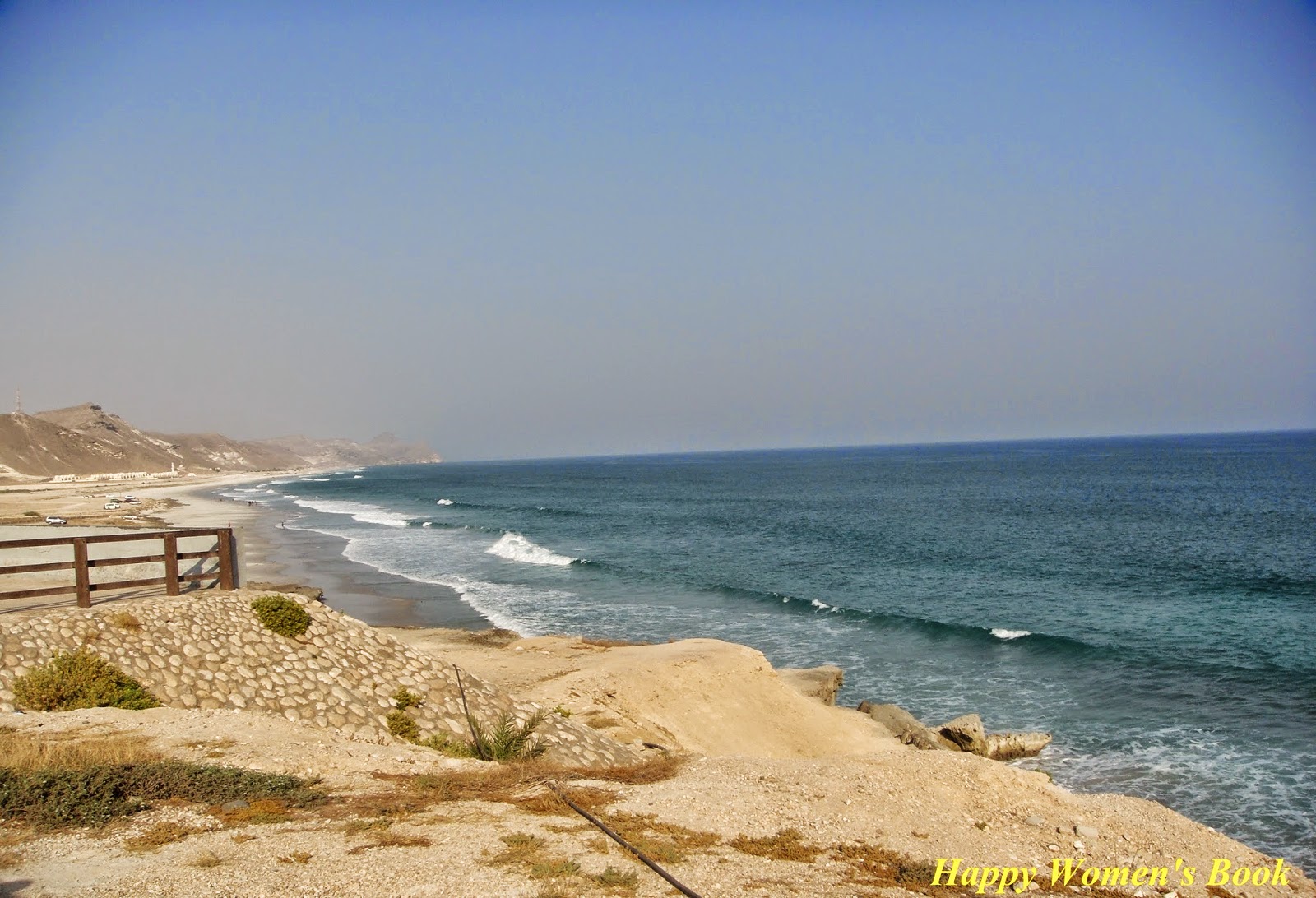 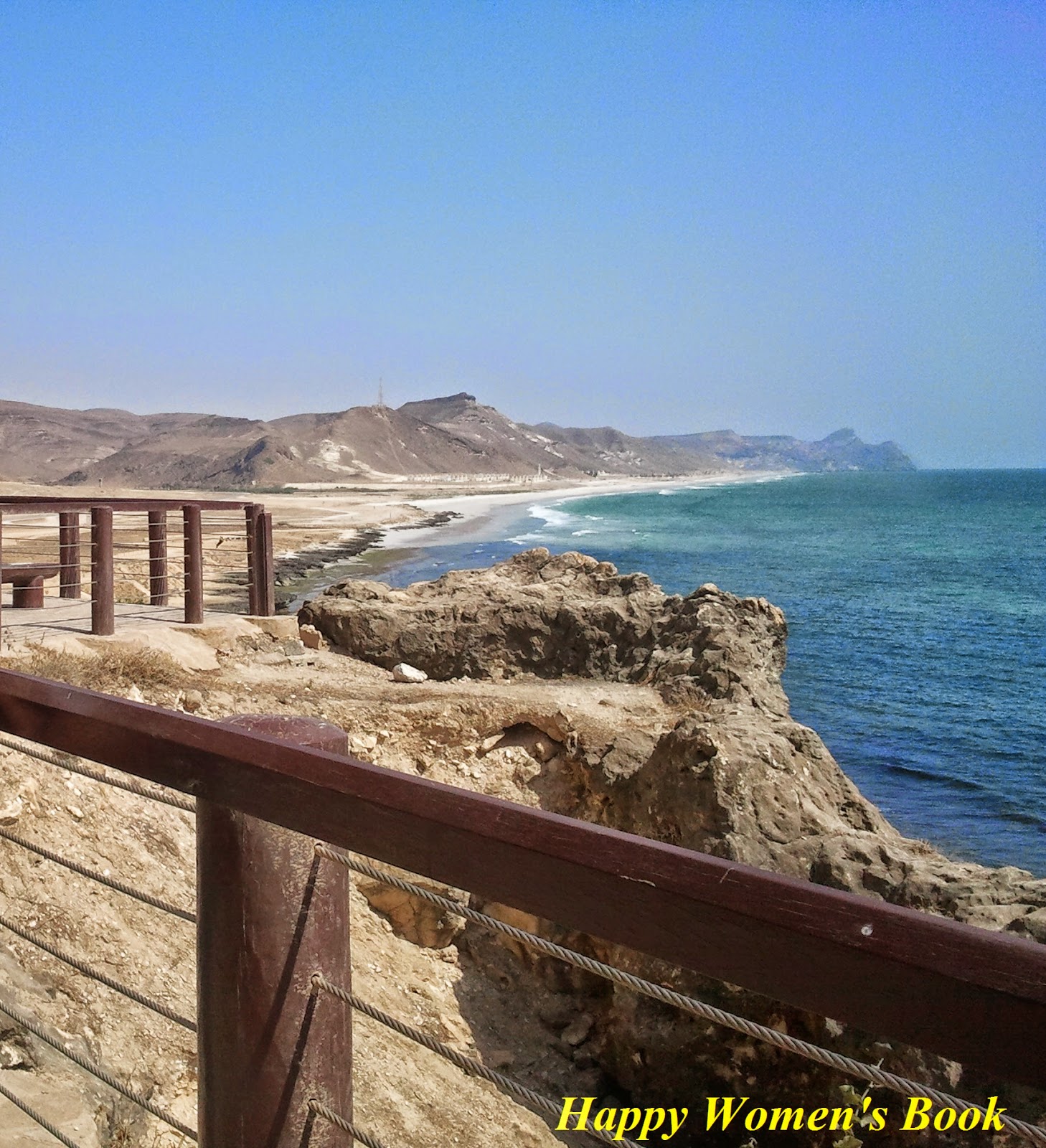 The sea looks clean in a pretty light blue in colour. 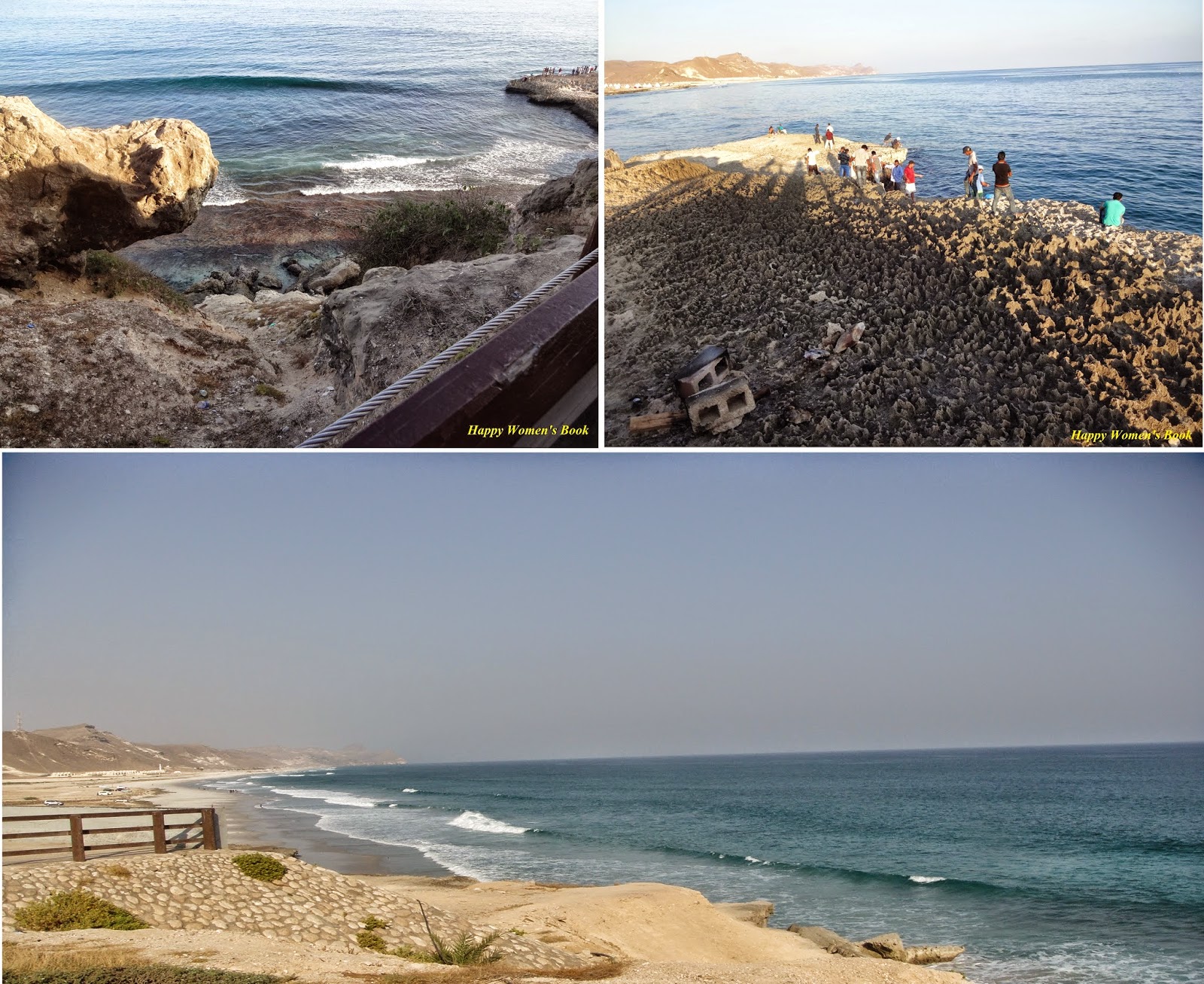 Al Marneef cave is few kilometres away from beach and looks elevated and curvy.The shadow of the cave falls down on the way to sea sight and blowholes.It welcomes people by showering its blessings through blowholes.Yes..it's true.From the cave, there is a guided way till sea side.We packed our lunch and thoroughly enjoyed with our friends and family there. 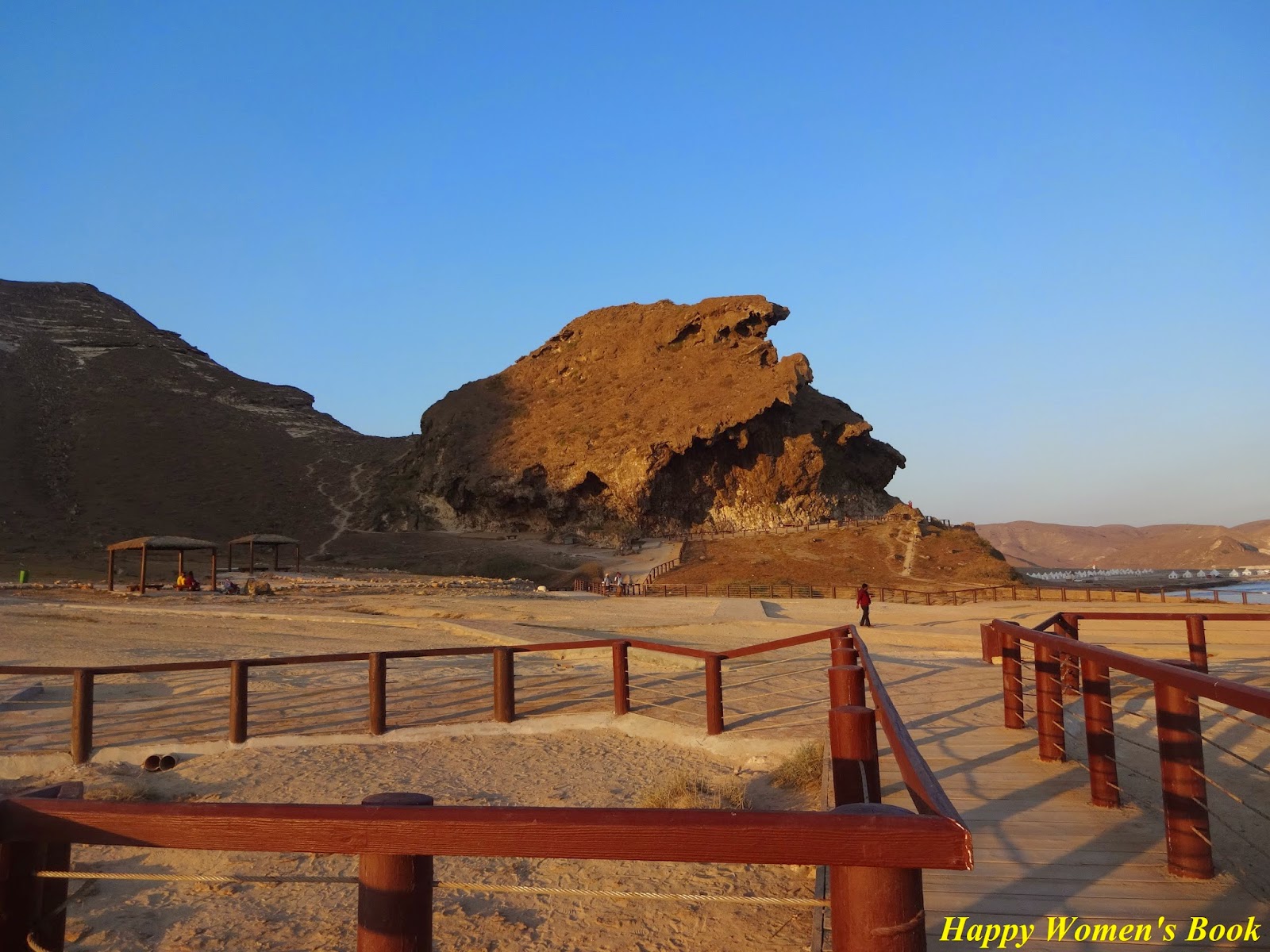 
stone with quotes on it; right side of the cave is the way to  beach.
During Khareef, the dried rocks are fully covered with grass. 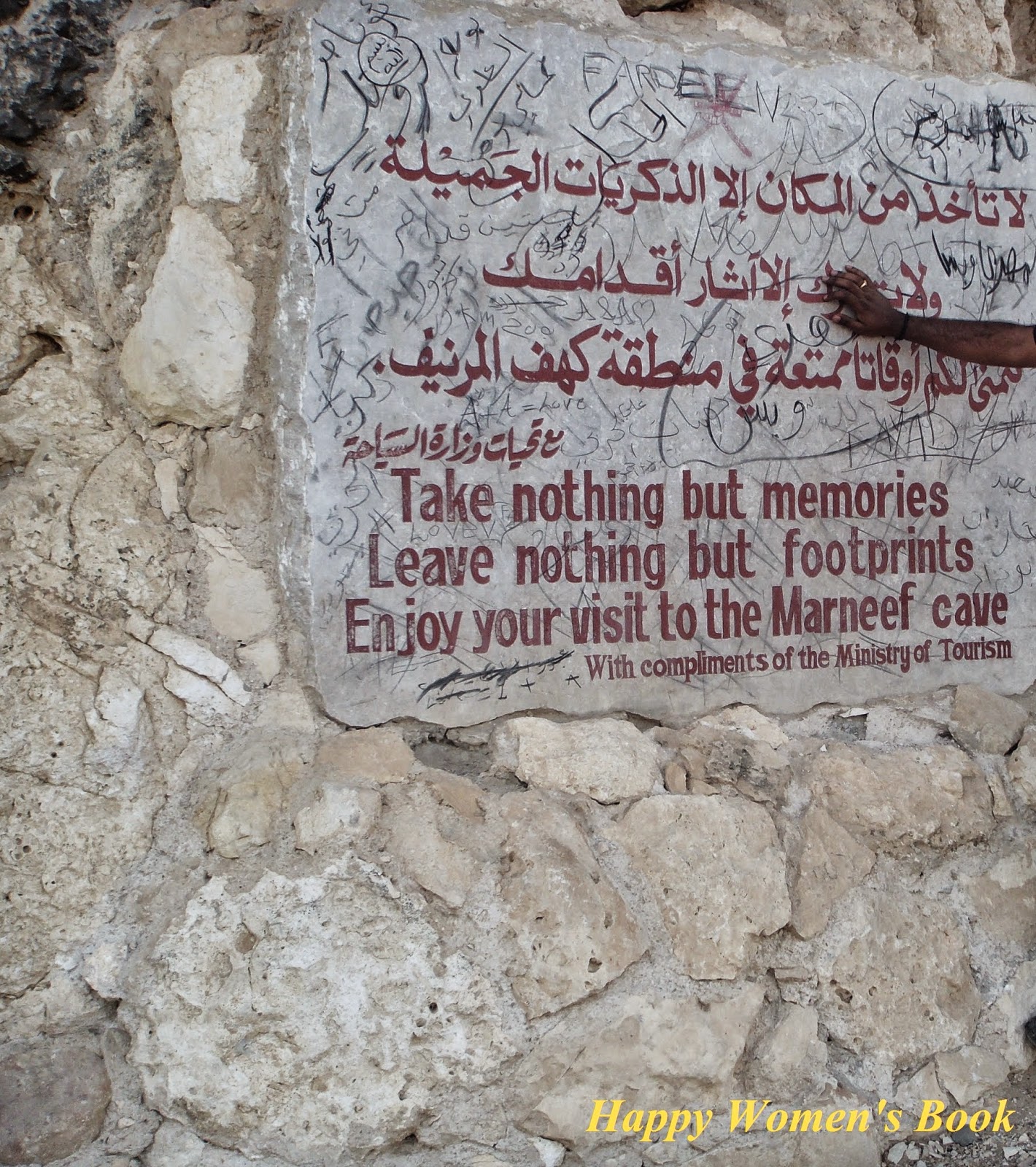 the Ministry of Tourism in the stone.

Note Written On The Stone : Take nothing but memories
Leave nothing but footprints
Enjoy your visit to the Marneef Cave

-With compliments of the Ministry of Tourism 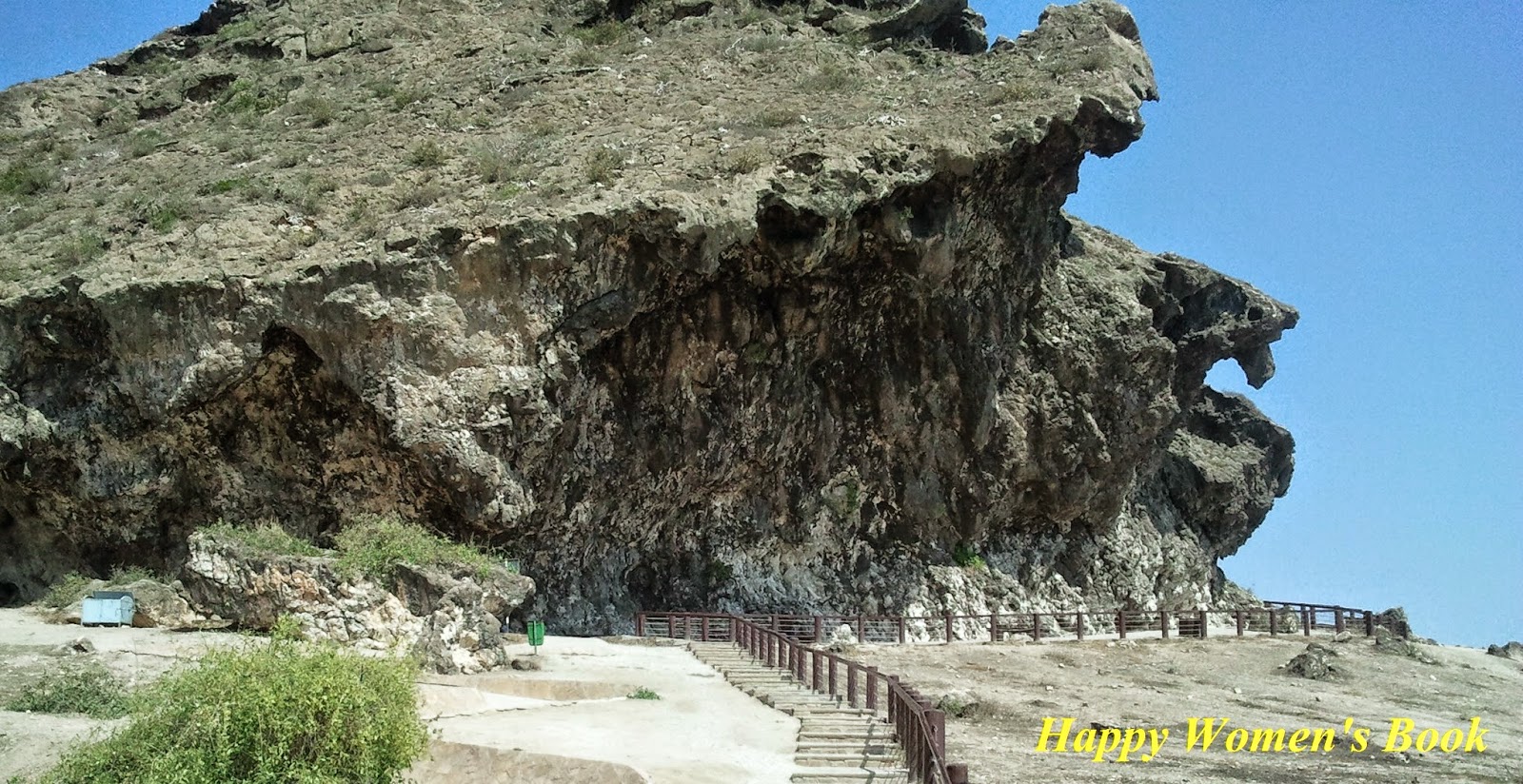 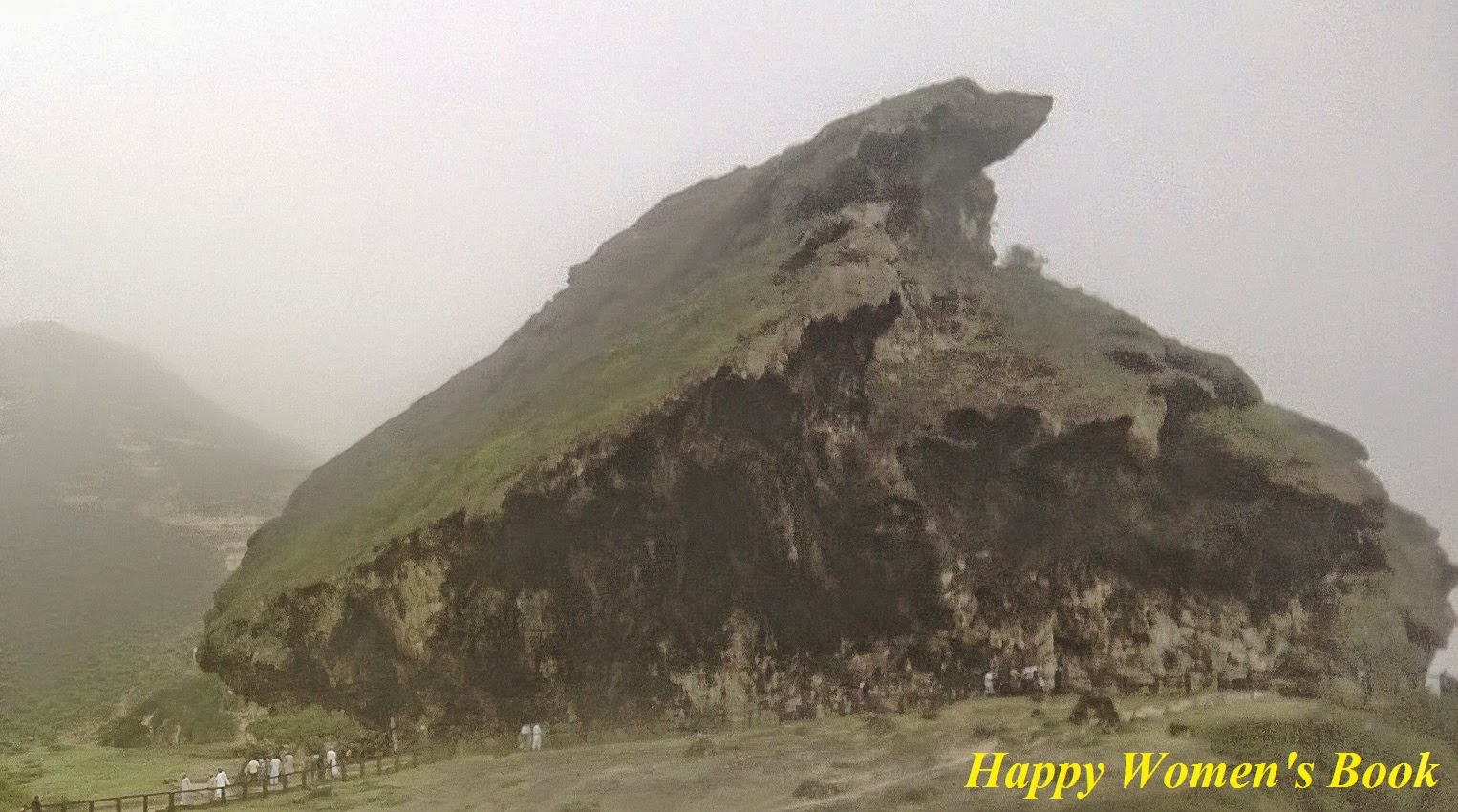 Blowholes are a natural phenomena which is generally formed on sea shores in limestone caves that is natural cavity formed underneath the Earth’s surface that can range from a few metres to many kilometers in length and depth.Limestone caves,after the natural process of erosion and excavation,a slow natural process is responsible for the decoration of the dull walls. 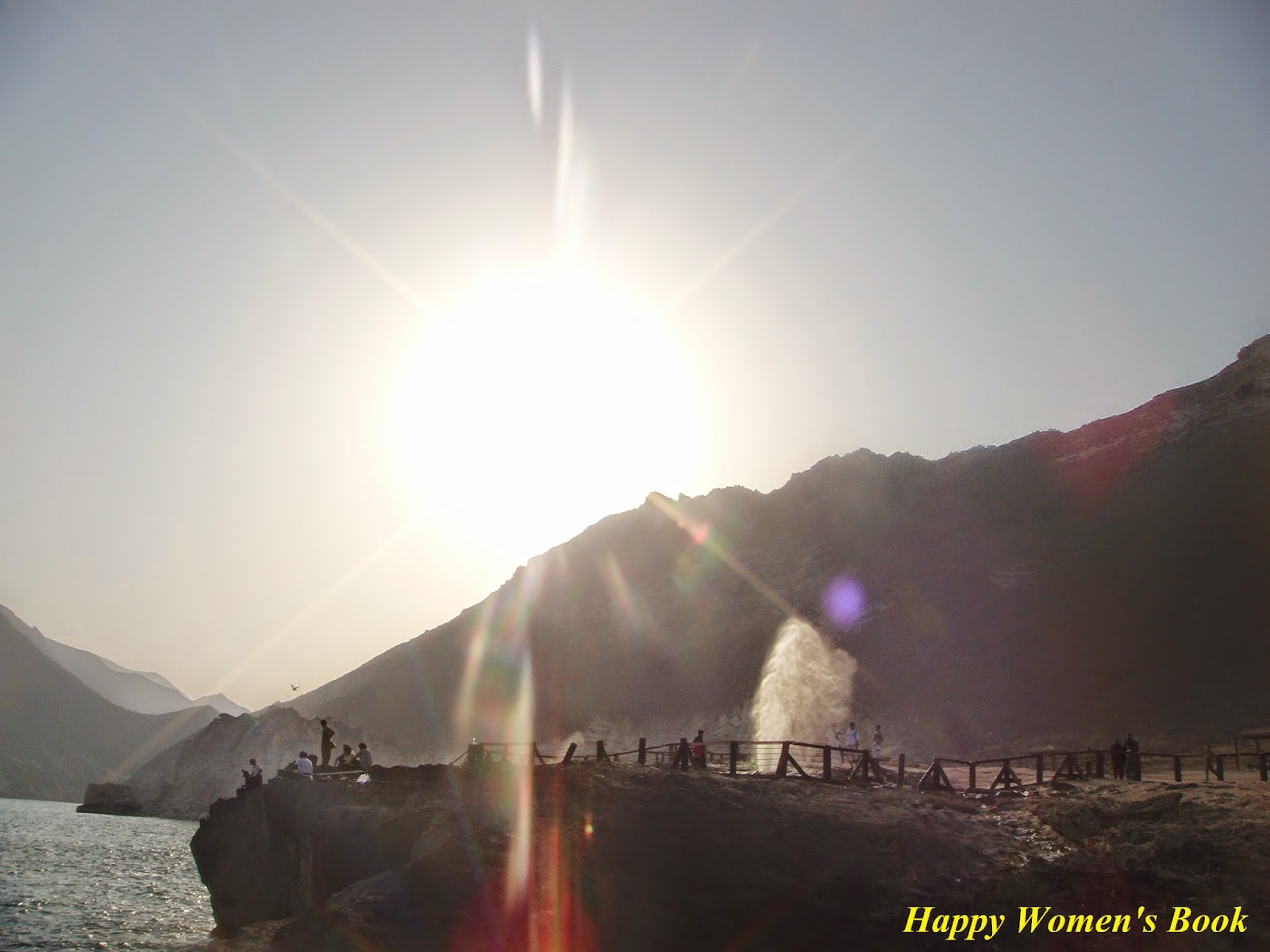 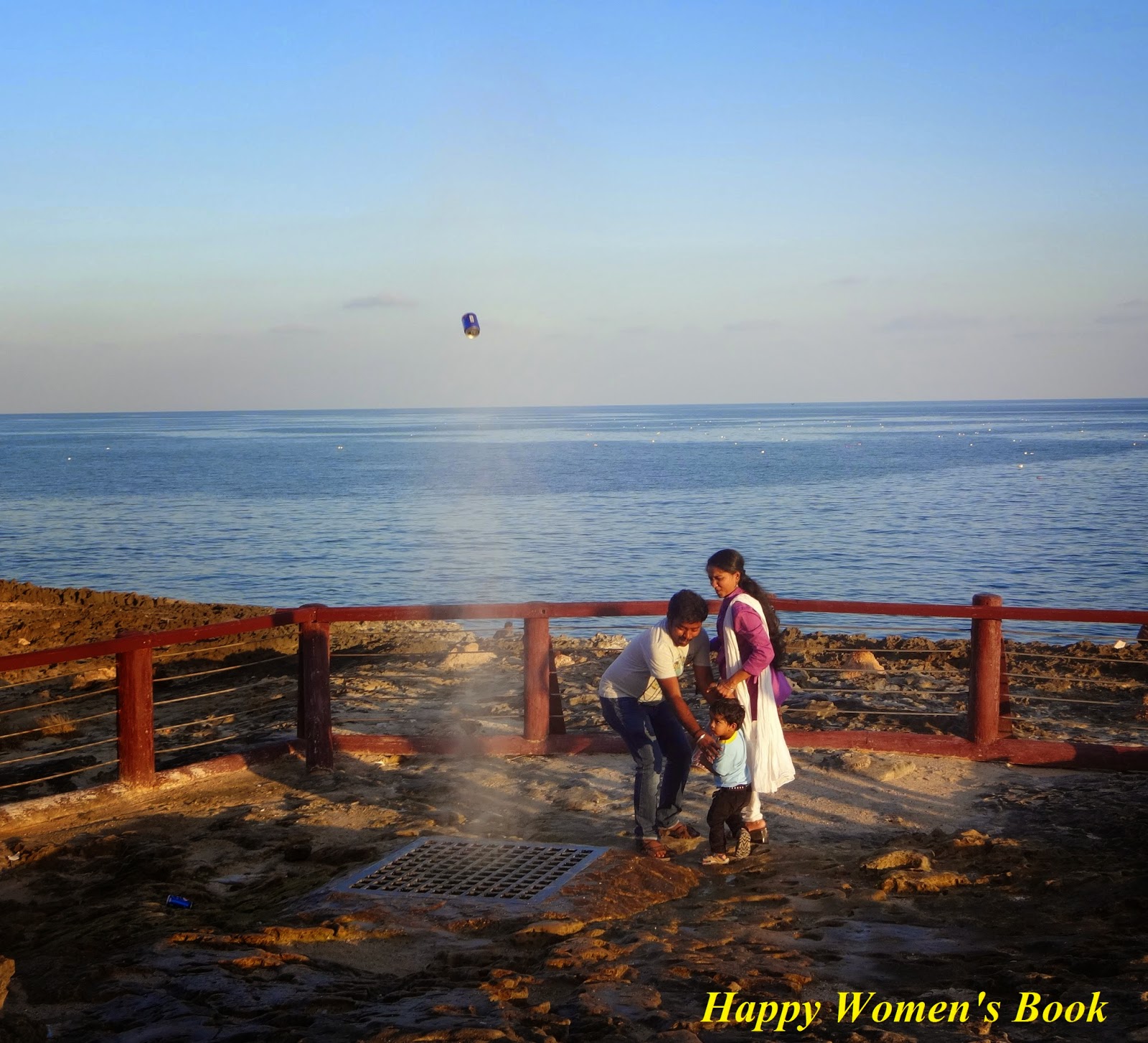 Above photo was taken at the month of november;
We placed the juice tin at the top of the blowholes.
The tin got blown high up along with the water showers
which was really amazing. 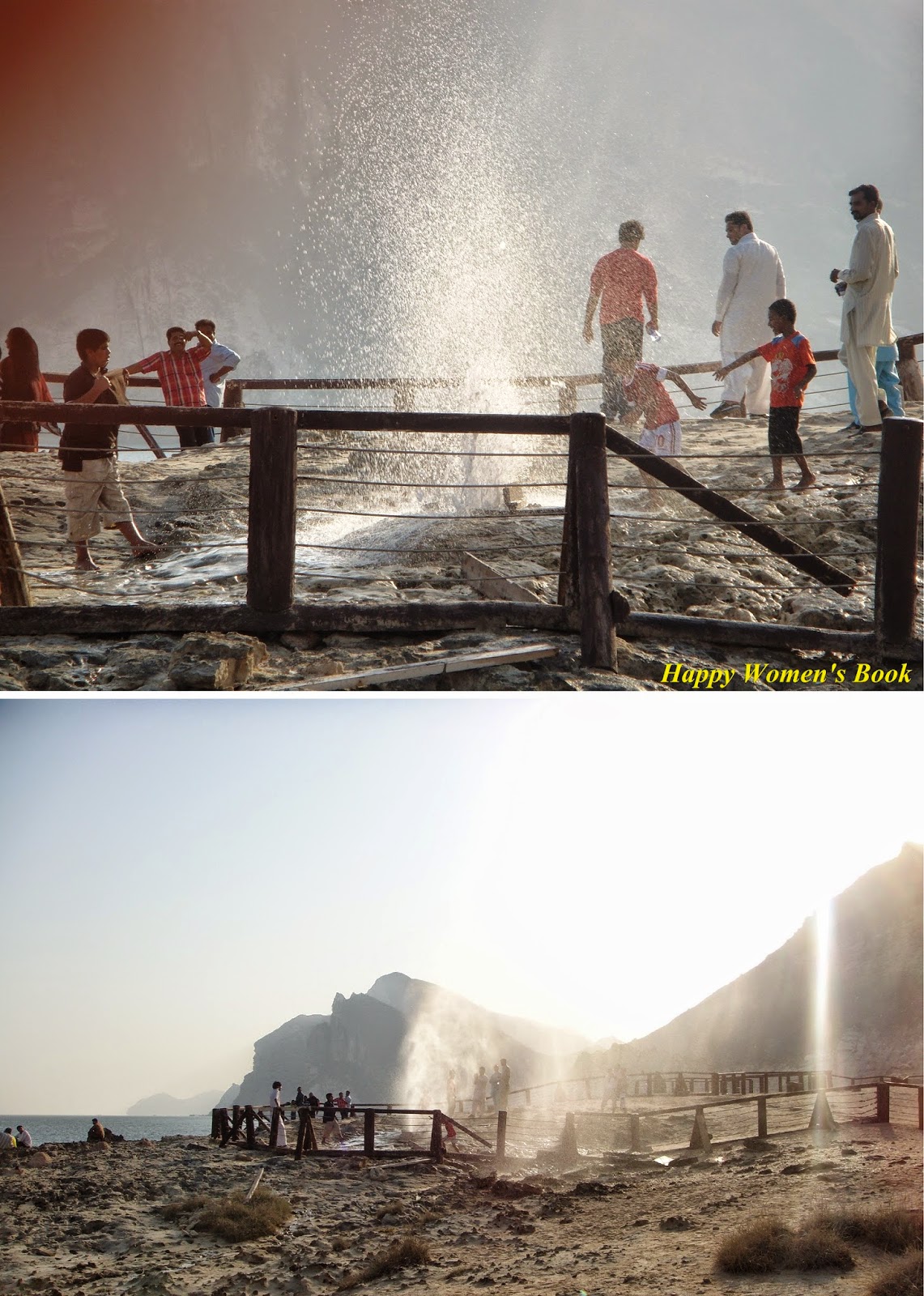 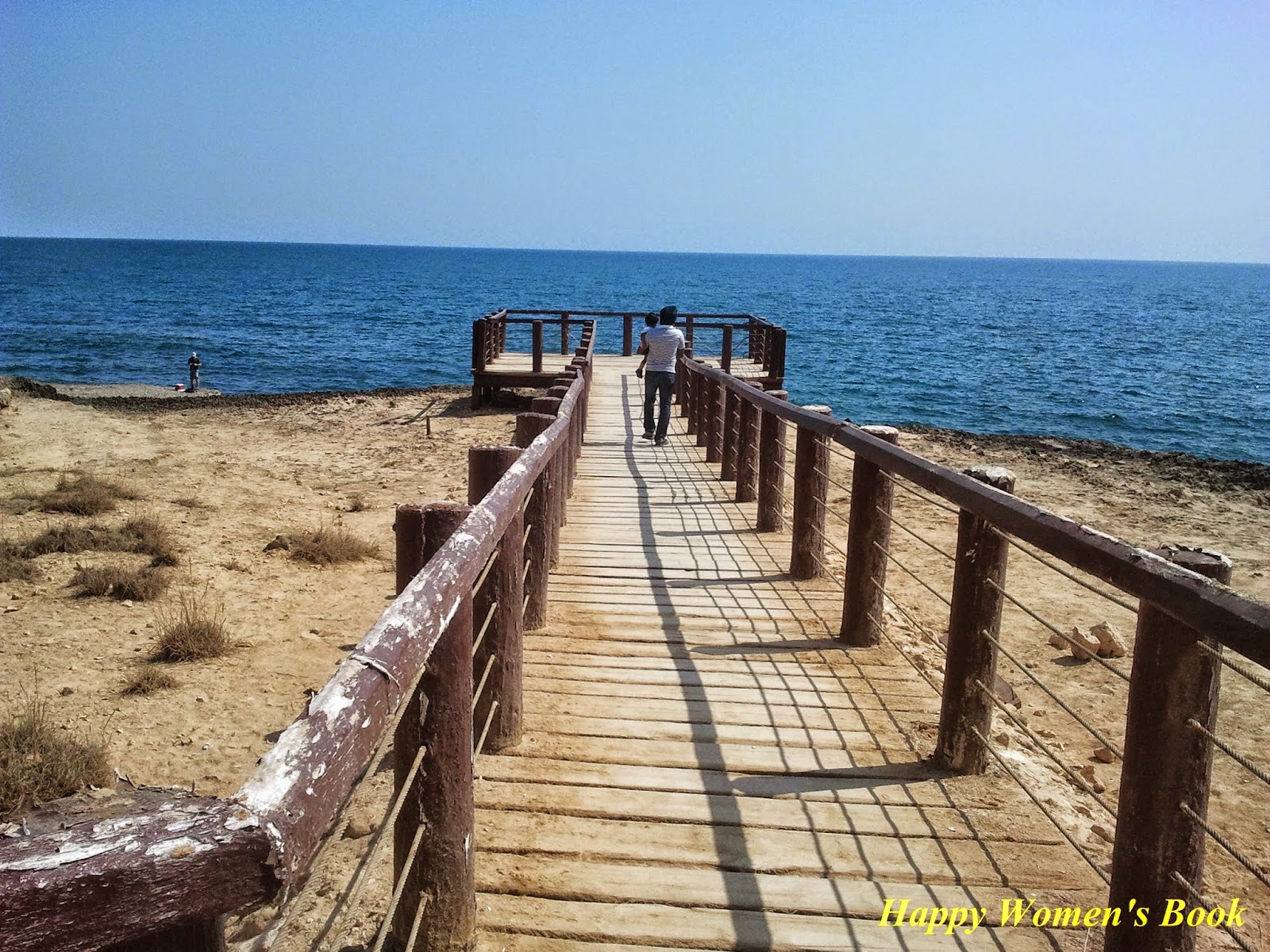 The front side is guided by the
wooden bridge which makes your snaps look awesome. 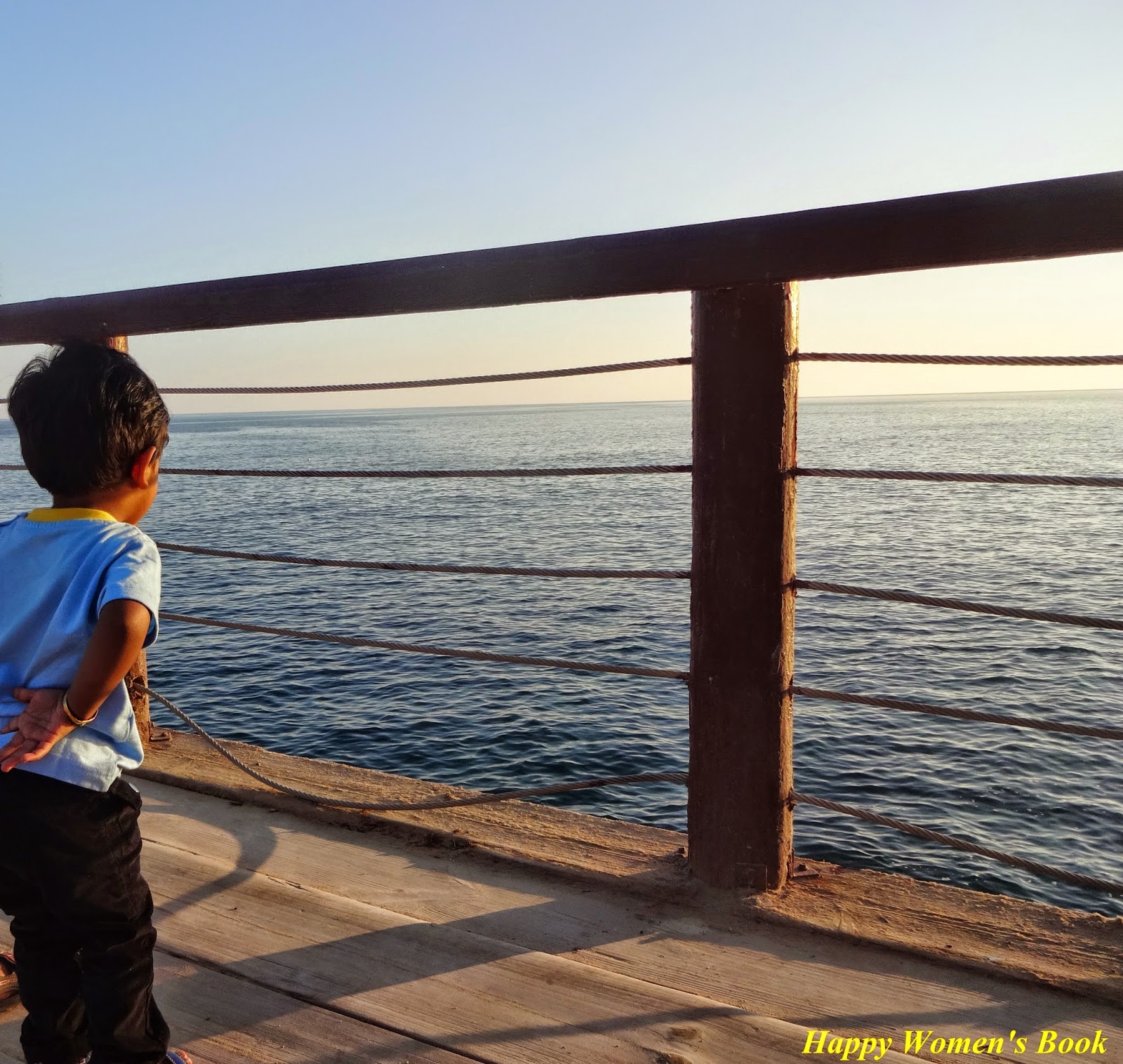 My Little Prince was admiring the dance of seawaves!!!

During Khareef season,the weather is very misty.
We felt the chill weather and the highlight was that,
it was drizzling the whole day. 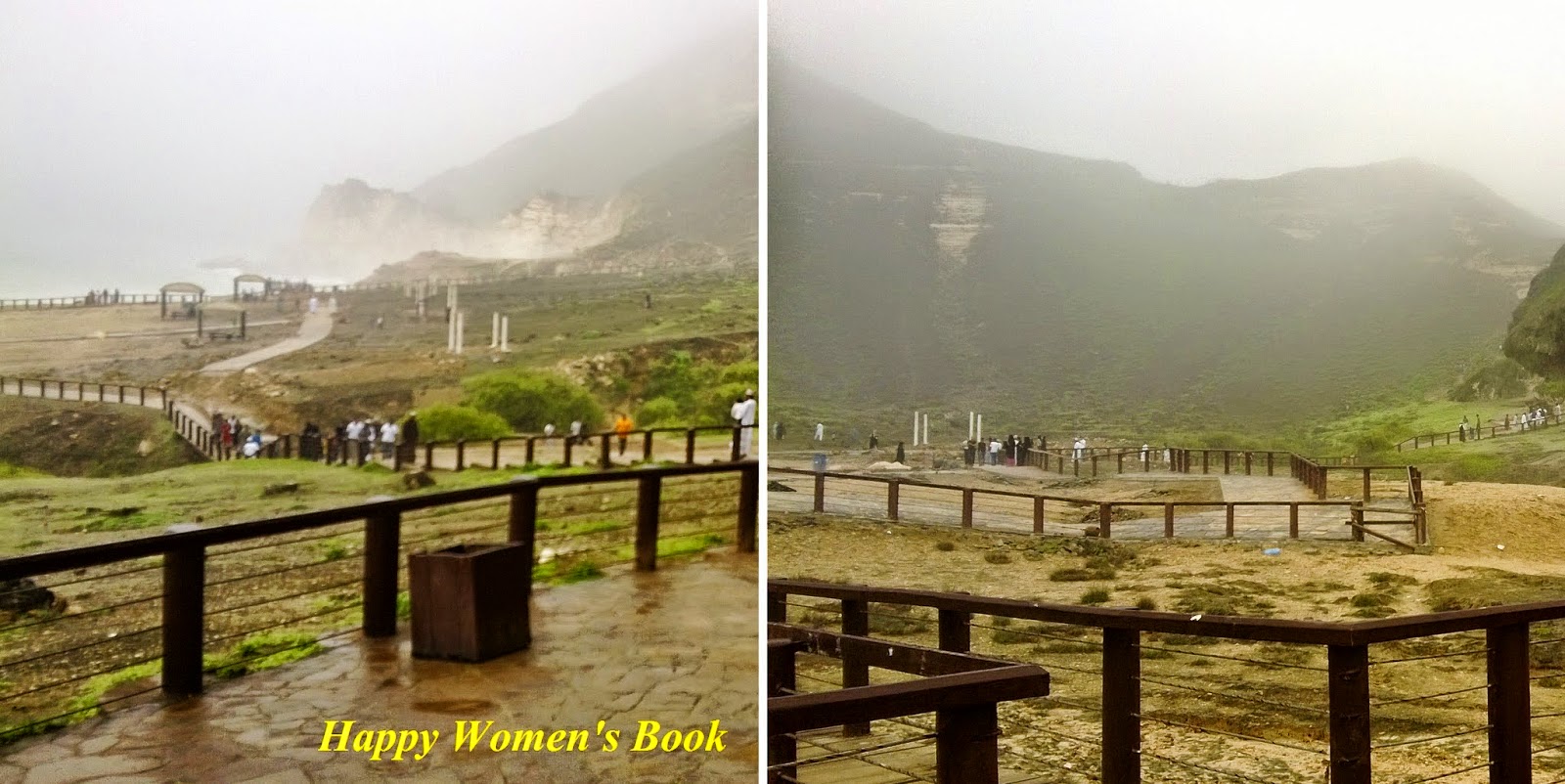 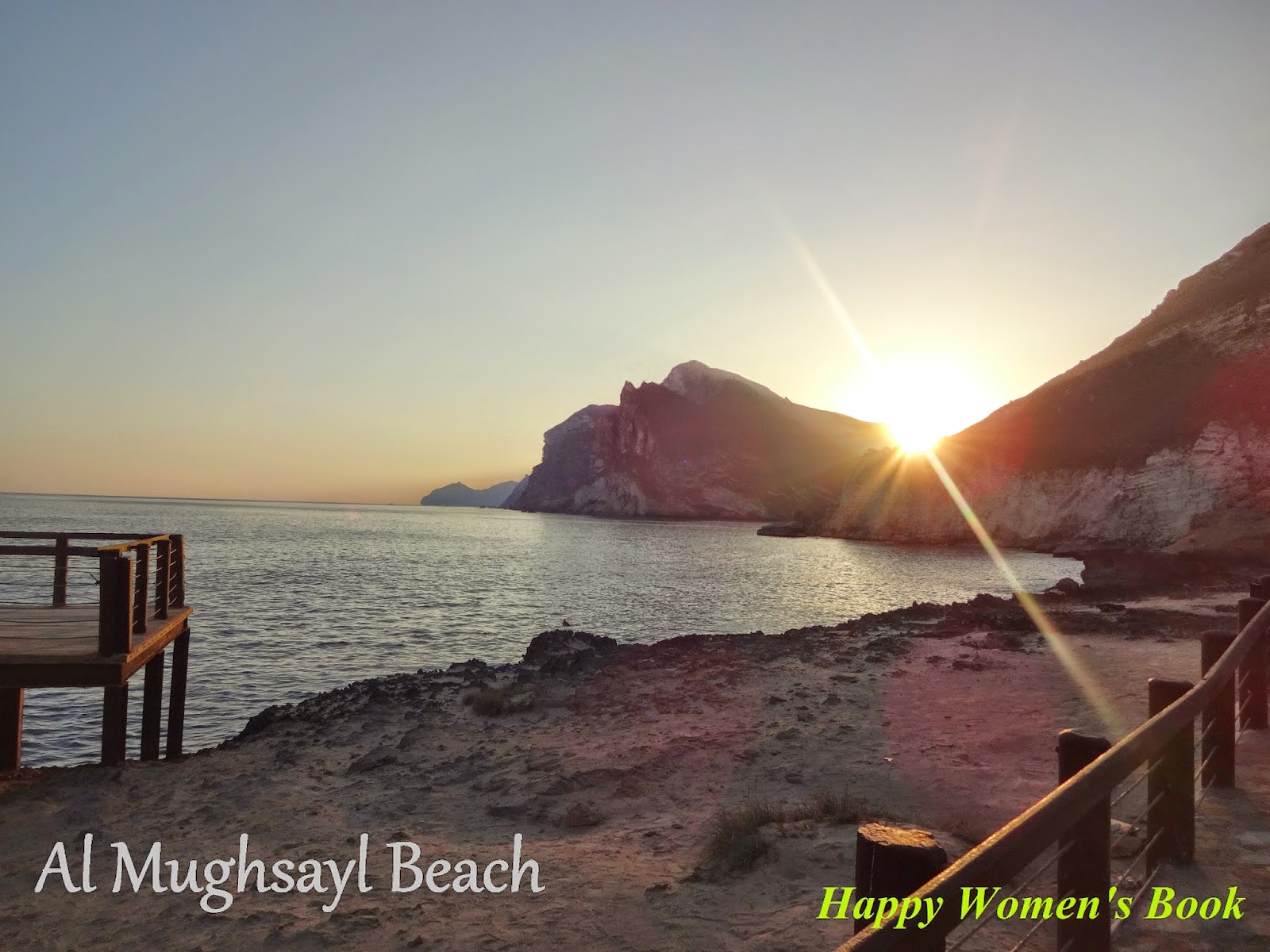 The sunset between the two mountains.
We were watching without blinking our eyes
when it slowly hid its face. 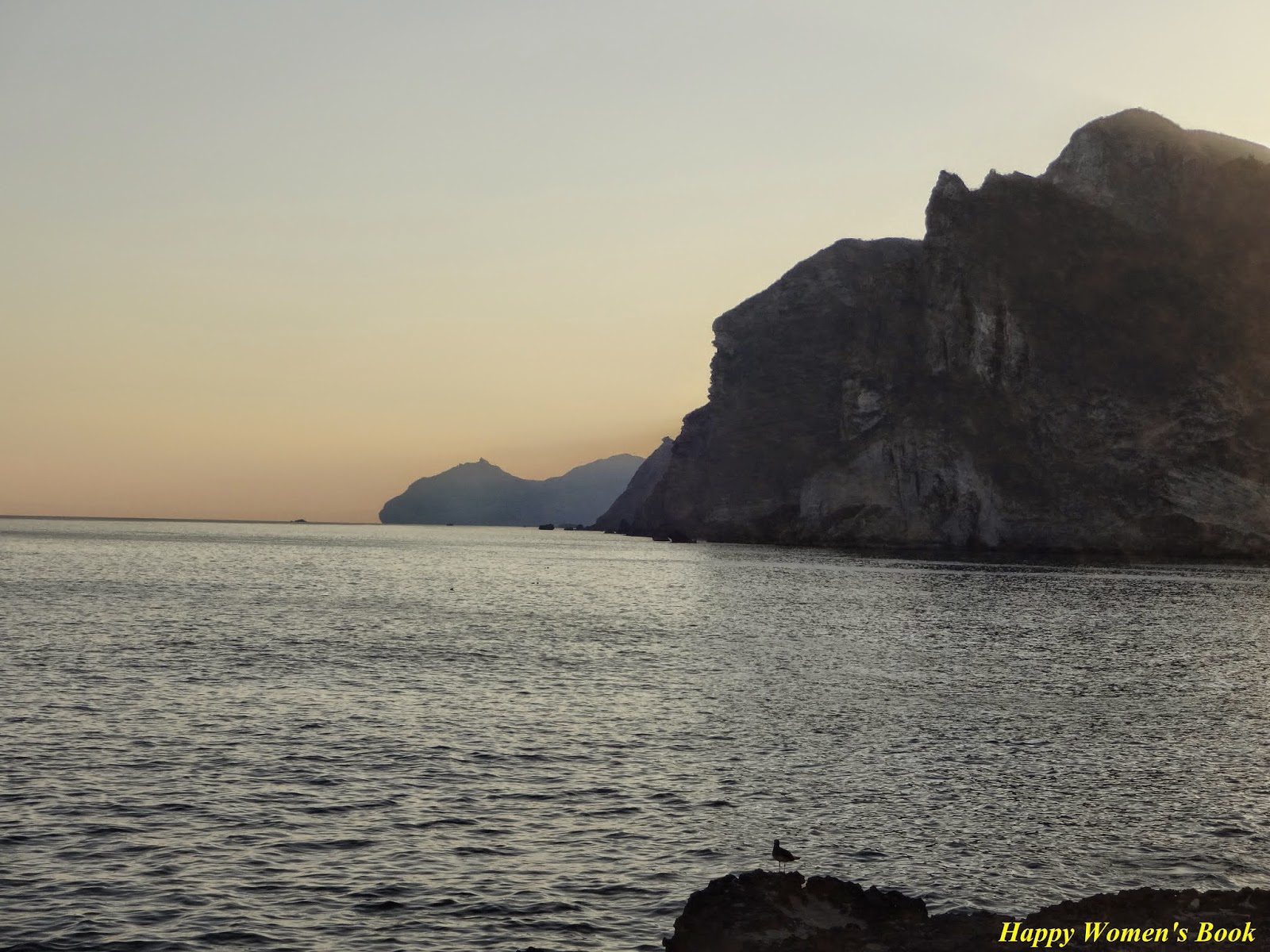 Evening time, beach is calm except the song of the waves.
A bird enjoyed and relaxed itself watching the sea
before going to its nest. 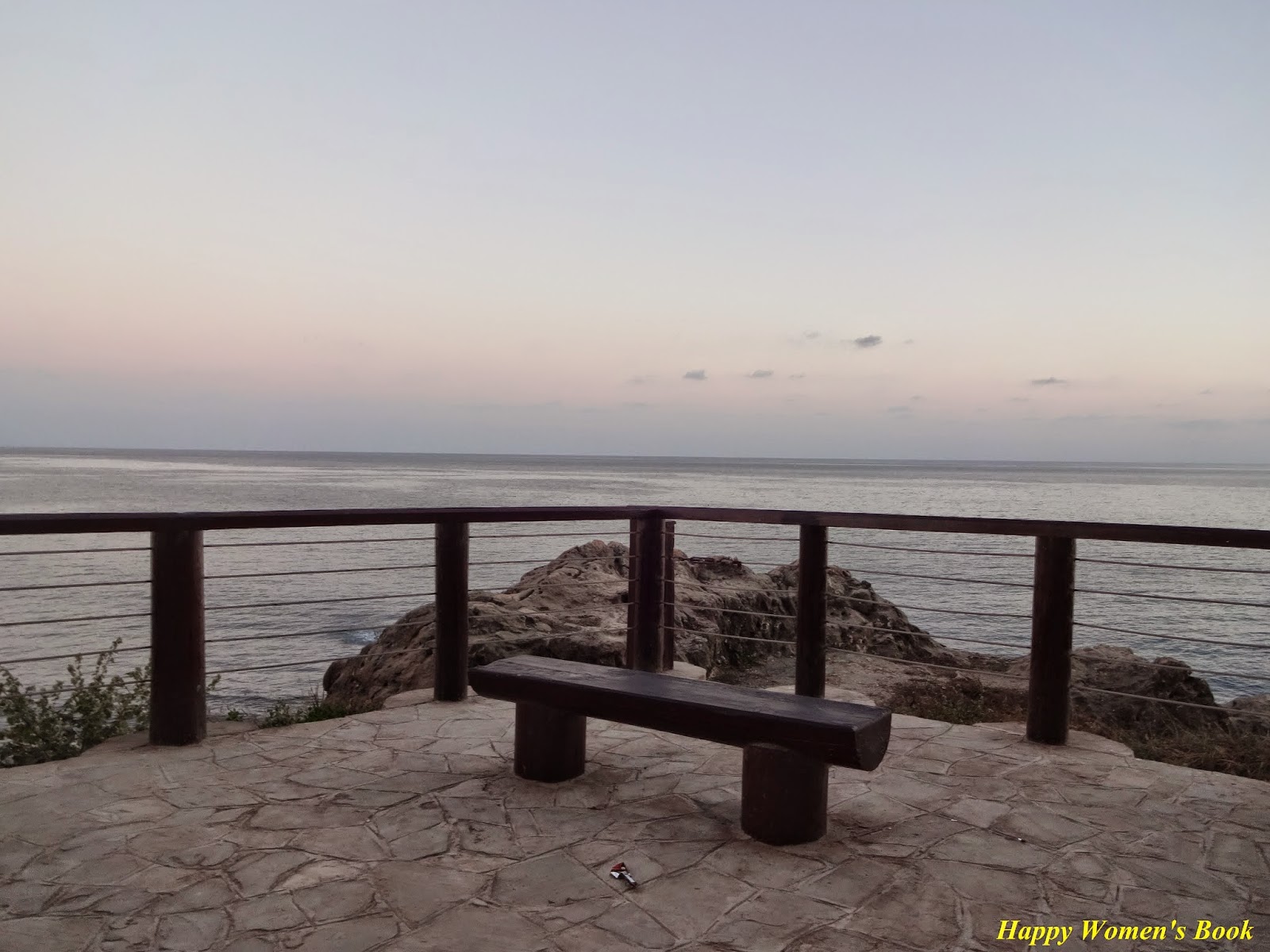 There were 5 wooden benches under the Al Marneef Cave
and nearly 4 wooden seats with roof on top, inside
the beach area, which is perfect for our dining.
There is only one Teashop in
the entrance of the cave near parking area.

Enjoy your holidays here ; this wooden bench is waiting for U.......

Hope you enjoyed this post.I will be back with another attraction next week.

Leave your comments as your footprints and send your suggestions through happywomensbook@gmail.com .Your comments mean a lot to me.

How To Make Lassi ? Lassi is a simple yet tasty buttermilk drink.This LASSI keeps your body hydrated.There are so many Lassi recipes,b... 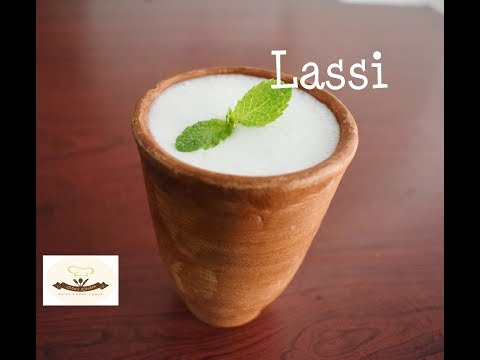